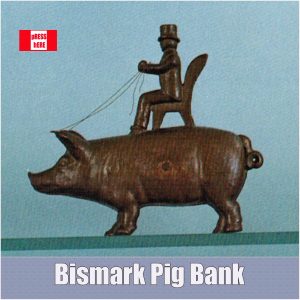 The Pig That Almost Started a War

The Kaiser Wilhelm Pig Coin Bank comes with an interesting story and it goes something like this. Around the year 1859 in the strait between Vancouver Island Canada and Washington, DC mainland is the San Juan Islands. A wondering off Canadian pig almost started a war with the United States; the dispute was called the Pig War or Pig and Potato War.

This is where the KAISER WILHELM PIG BANK comes in

This war was almost started between Canada and the United States, by a trespassing pig. These islands in the strait were disputed to be either Great Britain (Canada) and/or the United States. Both believed it was their territory.