In the series of THE LEAST YOU SHOULD KNOW this is where we will talk about STEAMPUNK Art. Having said that, even I never knew a lot about the art form or even heard of the Steampunk movement. After being intrigued by the term, by the time of writing this post, I’m at a loss on where to put this article. Should it be under “THE LEAST YOU SHOULD KNOW” collectables or just an interesting blog post on a different type of collecting or culture?

Jules Verne 20,000 LEAGUES UNDER THE SEA

The term Steampunk incorporates such technology that may include fictional machines like those found in the works of H. G. Wells and Jules Verne or other modern-day fiction authors] Other examples of Steampunk contain alternative history style presentations of such technology as steam cannons, lighter than air airships, analogue computers, or such digital mechanical computers as Charles Babbage’s Analytical Engine, such as the main photo.

By trade, I am a self endorsed Mechanical guy. Not knowing “before” what Steampunk would be or what to expect, I had to ask myself how I would go about looking for such a thing. Steam to me would be anything industrial and heavy-duty. Describing “PUNK” well, I would leave that to the imagination.

Steam punk is a sub-genre of science fiction or science fantasy that incorporates technology and aesthetic designs inspired by 19th-century industrial steam-powered machinery. Although its origins are sometimes associated with the cyberpunk genre.  Steampunk works are often set in an alternative history of the 19th century’s British Victorian era or American “Wild West”. A future during which steam power has maintained mainstream usage, or in a fantasy world that similarly employs steam power. However, steampunk and Neo-Victorian are different in that the Neo-Victorian movement does not extrapolate on technology while technology is a key aspect of steampunk.  The first known appearance of the term was in 1987, though it now retroactively refers to many works of fiction created as far back as the 1950s or 1960s

THE LEAST YOU SHOULD KNOW ABOUT  SteamPunk Art

So like all my other posts on THE LEAST YOU SHOULD KNOW I look for simplicity. Now that I have a vision of what to look for, Yeah, I have seen that art before. I run into some form of it at the antique mall swap meets. so, it’s not new. I just never recognized it before by a name.

It would be hard to explain what Steam Punk Art is, but I will give it a go! 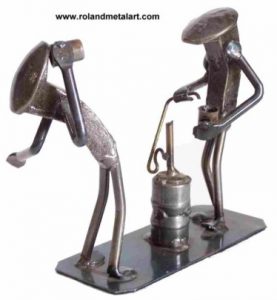 No, not in their original form, but bend them, twist them, make something out of these pieces of iron and now they’re called—  SteamPunk Art.

(These rusty old railroad spikes recently sold on Ebay for $49.99,)

I have some railway spikes that I can’t give away, but if I have Steampunk  IN THE SAME SENTENCE, NOW I will be able to SELL them.  Mainly, it opens up the mind to a question, WHAT WOULD I, or could I DO WITH OLD RAILWAY SPIKES or any discarded … anything?

That answer would be, let the imagination flow, and get that creative “YOU” out. That odd hybrid of collectible stuff is wildly popular with many a group of people, and why “because it’s different”.

Some creative people with a lot of time on their hands put a bunch of pipe fittings together and made a light out of it. Another would weld discarded industrial gears together, a few big and a few small and came up with another piece of creative art. Some of these people don’t even know that this is in a category all its own, called “STEAMPUNK Art”.  (http://ozcashfromhome.com/attractive_steampunk-light-fixture) (Beer bottle light fixture)

Now, knowing what I know about folk Art I would consider Steampunk almost the same, (but a little different).  It takes imagination and creativity by the artist to come up with and execute both styles of such art. And this type of art form as well as Tramp art, or even Trench Art it’s in the eye of the beholder.

In my younger days, I would explain Steampunk as being made by someone that had too much time on their hands and smoking too much of that Jamaican Gold, Stuff. Or a matter of fact, Canadian Gold. (LINK)  But this line of art has quite a following.

ORANGE EMPIRE RAILROAD MUSEUM which was last year, but none the less it does show the impact of “STEAMPUNK” and how it’s taking hold of America.

STEAMPUNK  IS WHERE SCIENCE FICTION AND FANTASY MEET

THERE YOU HAVE IT, I’m still not sure if it should be under “THE LEAST YOU SHOULD KNOW” collectables.  Or just an interesting blog post on a different type of collecting or culture? It’s not for everyone. The old industrial pipefitters desk lamp would probably not go well with your modern-day decor, or …WOULD IT?

Every household should have at least 1 conversation piece in their family gathering room. “AND THIS COULD BE IT” Something that just doesn’t fit or belong, something that would break the mood of when company comes over and nobody has anything to say-