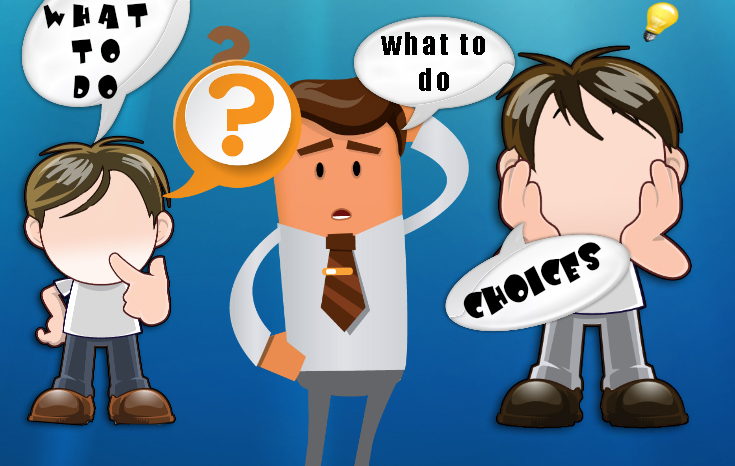 Making choices is what we do, and, there’s not a day that goes by that you don’t have to make a decision of some sort. It is part of a learning process, it’s part of growing and, it’s part of life itself. At the end of the day, it’s YOU that makes the choice. Good, bad or ugly choices, they all lead to self-improvement. The only trick is, you just have to learn and improve yourself by them.

This article might sound silly to some, and some people may even think it’s not worth the time reading it, but there are many people out there that are too busy blaming everybody and everything for their mistakes. What they don’t realize is, it’s been their choice all along. They just found it easier to blame, anyone different other than themselves. So yeah this article might not pertain to some, but to others, it might.

Hard to believe, but, choices lead to self-improvement and, “We all make choices.”

Should I cross this street? It looks safe enough. That’s what subconsciously you’re saying to yourself. (Check twice crossing a round-about) You’re making a choice, a free decision, and, “on your very own.” I used to find myself saying, “I made it through the week, no heavy thinking involved, no choices I had to make. “Nothing,” I made it through another week.” Ho Hoo

But did I? I did have to go to work, I could have stayed home, that was a choice. The food in my mouth I decided to eat, that was another choice. My mother, God rests her soul, doesn’t force me to eat my food anymore. Now that choice is mine.

No matter how trivial it is, the choice has always been . . . mine.

The saying goes like this “I turned right when I should have turned left.”

But looking at all these photos, and some go back many years, I found myself saying this far too often about these pictures, they are all telling a unique story. I turned right when I should have turned left. Looking at these photos I could say the same with a few family members that they themselves turned in the wrong direction. It’s easy to look back and say those stupid things, but it’s right there in front of you, in those photographs.

The happy faces then and now . . . life seems to have taken its toll on some.

But it’s a little harder to look in the future, and no matter how old you are or wiser you think you are, “that’s … a little harder to do.” The assumption is the older you are the wiser you become, but that’s not necessarily true either. It’s just that you can look further back.

I could also say after looking at my own pictures, again without thinking, according to those photos, I had it made back then, I just didn’t know it. I just turned right when I should have turned left.

So there goes my theory. In my younger days, I used to have this saying and I’m probably not the only one saying it. “I never had a break in this world; everything was an uphill climb, somebody up there just does like me.” Bla, bla, bla. “Sorry me “

Until I reminisce over these old photo’s. I just didn’t know it at the time. But I had a lot of good things happen to me, I had good friends around me that I should have held closer, I had an opportunity that I didn’t take, “I was looking for something different,” and there were opportunities around me, all along.

So the choice is ours to make, and as you look at the past, remind yourself, “I just took the wrong turn.” I’m going to turn the other way next time that choice comes around.

The choice we make in the very end is still not guaranteed to work.

But choices do lead to self-improvement, good or bad. But you at least noticed your mistakes and tried to improve on them. We all make choices. We have to. It’s part of a learning process, part of growing up, living and learning. And, never be scared of change or making choices or even opening those doors to the unknown.

It’s healthy for your personality building. It is being aware of yourself you’re your surroundings, testing your personal boundaries. That’s all normal and good stuff.

So as we look through those albums I’m looking at these photos though different eyes and am still saying and only by instinct, “if things could have been different if I only would have turned right instead turning left.”

Good choices one makes in a lifetime are not guaranteed.

When it comes down to the real crunch and you come to that crossroads, and you’re just not sure what choice to make, you will always hear your mother’s voice in the background saying, “make the right choice, you can do it.”  God himself gives us free choice, free will.

The only piece of wisdom I can give a person is, try and make the right choices, give it the extra effort because, in the end, your friends and relatives that love you dearly can’t make all the choices for you.

The choices we make in the very end are not guaranteed to be the right one or even work. But it is our individual responsibility to try and choose wisely. Your choice has always been your choice, choose wisely.