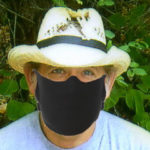 author of this article with coronavirus mask on

The gun tragedy in Nova Scotia Canada that killed 22 people to date. The shooter was dressed like a cop, driving a vehicle resembling a Police Cruiser. He was evading the Nova Scotia police department until they caught on to what he was driving, a decommissioned police cruiser. It was a surplus police cruiser from a legitimate government authorized auction house.

It was far too late for some people when the police were on him.

Many years ago, when building custom cars and hot rods were at their peak, it wasn’t uncommon to want something different. A friend of mine took an old black and white police cruiser, fancied up rims, high test engine, and all the original warning lights. The car was a show stopper and with many trophies for the nicest car at car shows.

At the time, many police cruisers had high powered engines and they were a hot-rodder’s dream come true, so if you scored one of them at an auction, you were off to a good start in the classic hot rod scene.

Winning awards at the car show were different than just using it for a daily driver. The police forces around the country forever pulled him over every chance they had, and some police officers even tried fining him for impersonating an officer.

Upfront, it had that classic, souped-up hot-rod look, but at driving speed, you could have fooled almost anybody.

Gun tragedy in Nova Scotia and a Surplus Police Car.

Sure it was fun to get beside your unexpected buddy and turn the lights on and with the siren roaring. But driving that car on the street was no picnic and being pulled over all the time, the vehicle eventually had to go. Those days are over.

But that was then. The Times Have Changed.

Being an auction junky, it’s not uncommon to see a decommissioned police cruiser at a government liquidation sale. Most of these vehicles have a lot of life still left in them, and you usually pick them up at a reasonable price.

But like I said, “Today Is A Different World.”

Having said, I always wonder even way back then, why did you sell surplus police cars or anything related at a public auction.

So, it’s no surprise that the tragedy in Nova Scotia Canada with a surplus police cruiser was part of the story.

Sure the markings are removed and the specialized hardware from inside the police cruiser was all taken out, but with some outside cosmetic work on these auctioned off police car ─ well, the shooting tragedy in Nova Scotia is a prime example of what could happen.

Since that sad day, copy cats are duplicating the police car scenario and pulling over drivers. One was caught in Ontario doing the same thing, a few days later, but only for kicks.

The ramifications of a policeman pulling you over now, well, you would be skeptical today even to stop for an officer, just in case he was an imposter.

These look-alikes have tarnished the public trust in our police forces around the country. These over the counter surplus police equipment should not be sold to the public.

There is one way to stop this 21-century problem.

Who would want to buy a surplus armored truck, me of course, but for what reason? That would make sense if you were a collector but I’m not.  But the average person has no reason to own one, well, except for devious purposes.

These surplus police cruisers, swat vans, anything that resembles a police vehicle of any sort, should be dismantled and sold for parts and only to a scrap yard.

The public cannot buy decommissioned Police uniforms, so, all pieces of police equipment should be dismantled and discarded the same way.

The question is, how many times have you spotted a police cruiser sitting on the side of the road and after slowing down to a crawl, you notice it’s a privately owned car, and the owner is just taking a nap?

The decommissioned cop car used in the slayings in Nova Scotia is only a small part of the equation, but without that deception, this tragedy might not have happened the same way, (or at all.) Do not “auction off Police Anything!”

The shooter described himself on Facebook his affinity for buying and refurbishing old police cars, even down to the uniforms.

A Toronto criminal defense lawyer Daniel Brown SAID, Owning or possessing police equipment — whether real or a very good replica — isn’t itself a crime, Neither is the reproduction of police symbols or decals, he said, such as those found on the shooter’s vehicle that he was driving.

“People put a lot of trust in the police,” Brown said. “Someone can abuse that trust by acting as if they are a police officer.” Silly thing to say really, they’re missing the bigger picture. The police forces in Canada have just lost the trust of the ordinary Canadian Citizens by selling surplus police cars. The world is in a different place today.

Our hearts go out to Nova Scotia, signed …  “The Rest Of Canada”