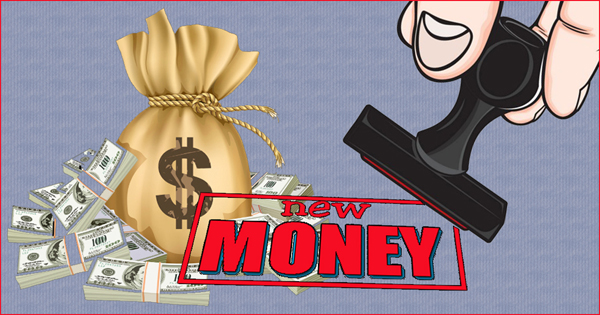 What do they mean by old money? What is new money? Well, it all stemmed from watching one of my all-time favorite and tastefully done movies, the “Titanic.”  A caption in the film caught my attention, and it went something like this. But the plot was referring to one of the main stars in the movie that was born into money. And somebody related to him as, “He comes from old money” Old money meaning the person was born into wealth.

Old money just means the person was born into money. New money would be a person that made their money or fortune by themselves. Somebody that starting up his own profitable company would be considered new capital. (money)

As I like to pick on governments for not doing things, “the way I would do it,” Canada is in my sites. Being I’m Canadian, I can pick on us all I want, eh, and it would not fall under the category of “discrimination.”

To my knowledge, Canada does not own any substantial and manufacturing in this country. I mean we used to. The Auto section, farming, are mostly all primary productions of significance and are foreign-owned. They were bought out, sold out many years ago.

Avro Arrow would have been considered ….new money

All Canada’s Prime Ministers worked on, in my estimation, “old money.” When the government spends too much money and needs a fix of revenue, it seems that the gas goes up at the same time and, sometimes, as much as 10 cents a liter. That’s a given revenue source. For our American brothers, that’s like 40 cents of your gallon. And, there are other ways they get a fix, (a sudden influx of money) but that’s the one, everybody in Canada understands.

What do they mean old money — New Money

We now have Legalised Marijuana in Canada, and before long, we will be the leaders in the DOPE Industry and will be labeled the dope capital of the world. Now that’s a legacy for any Prime Minister. Woo Hoo, But it does bring in good, needed revenue into Canada coffers, and that would be a given revenue maker. Would that be considered old or new money?

But that is still an old, simple way of making money, and to me, it would fall under the category of “old money” It would be the same as tightening up the one arm bandits at the casinos. Old, it’s a sure easy way of making extra revenue without really trying. And that’s ok ─ Kinda.

Canada Avro Arrow Supersonic Interceptor would have been classified as “New Money.” but it is gone.

This is nothing new, and it’s not like corporation don’t milk a profitable product, that’s easy money. The movie industry does it all the time with #1 franchise of whatever??  #1 was a hit #2 #3 #4 of a sequel will do better and then, “Back to the beginning” before number 1.

Instead of Canada being a leader in something, we will forever be the follower.

Like I mentioned, Canada, to my knowledge, does not own a transportation industry or manufacturing of any significance. If we are referring to new money, well, it would be suicide to try and break into an established market with today’s thinking.

Canada should think outside the box. “New Money”

(Bombardier) could at one time be considered Canadian and ─  in the Transportation Industry, but I’m not sure who owns them. However, the latest is, they just sold some or most of their divisions to an outside the country buyers.

So as I mention that Canada should be investing in new technology (new money) instead of old, secure currency. (Old Money)

We could instead, for example, not make the cars or trucks that would cost billions to set up, manufacture, and everything that goes with marketing. But a replaceable engine or at the very least a revolutionary part of futuristic, environmentally friendly power units. Being more of a significant portion of the space industry, that would be thinking outside the box.

And I still think Blackberry is Canadian owned ─ I think?

Be a leader in technology in a power unit that would replace the old aging, milked, 150-year-old four-cycle gas polluting internal combustion engine. Did I mention that the style of engine, makes up most of the power unit is the driving force of anything that moves on this planet? From your push lawn mower to the car you drive to the bus you go to work on, they all work on that same concept of an engine.

And — while I’m at it, computers, electronics, and everything imaginable have been altered, replaced, and changed in leaps and bounds. Overnight, the electronics that you bought yesterday are already outdated today, and new technology took its place.

The jet propulsion engine would be another example that I think needs an upgrade, why because it’s a fusil fuel guzzler like the gas engine in your car. That design has not been updated since the late 40s. Yes altered, made more efficient — but still the same concept. It sucks in pure air that you breathe and spits it out the other end in pollution.

All of Canada in the winter is under snow. In the remote part of the Arctic, fresh food is always in short supply. The cost of shipping fresh food to the remote communities is in high numbers in dollars. If they can grow food on Mars, why can’t they grow food in the arctic? WE should be a leader in such industries and technology. Part of Canada is above the 50th parallel, which is usually cold and not very hospitable for growing fresh anything, but can we?

Canada could and should invest in technology that would replace not the plane, but the power unit, the engine, or like Blackberry, train their thoughts on a revolutionary part of “what-ever.”

This is not an impossible task to do!

Remember, the invention of tomorrow, haven’t been invented yet.

My given trade is in the transportation industry. This is why I think that the old and yet reliable “power units” industry needs an upgrading no replacing. Canada should start bringing in some “New Money” should be more known for a new revisionary technology other than the world capital of finest Marijuana sold, short of Amsterdam Netherlands.

I don’t indulge myself or partake in such activities ─ but ─ “Just what I hear from other sources, its good shit.”

But again, this is only my opinion

At the time of writing this article, there has been a sudden turn in world events. The world is now FOCUSED ON THE CORONAVIRUS PANDEMIC that has many people across the globe worried.

The Coronavirus (is a high test stubborn flu) and it’s has hit our community hard. “No, That’s Not Right” — all the world communities hard.

All the world governments and Scientists are united in a common front to rid this epidemic. That on its own is refreshing to see.

These pandemics, unfortunately, will be seen more of, and, some say, it’s partly due to population over-crowding of the earth. (All 5 billion people and will double by the end of the century)

This scary world pandemic is where Canada can be a leader. The cure is out there, and after that, there will be another flu to find a cure for. So these problems we have today — will not go away any time soon. The landscape will definitely be different tomorrow.

The coronavirus is a wake-up call to the world that we are all in this together, and this unfortunate epidemic is an “Opportunity That Is Knocking At Canada’s Door.” We have the Technology, the Purpose the People; the talent, we need one more ingredient!

Watch for my series on “Climate Change” is it even real?

Being this post is about New Money. If Canada comes up with a cure, can that be under that same category?

I would call that “New Money.”

If You Find A Problem With My Website, Please Go Here.