The fun of Still Bank collecting, but are Still Banks Worth Collecting? To find out if a money bank or still bank is worth collecting you should at least know a little background and history on these unique toys that you just, put your loose change in.

First and foremost, I don’t know why a still bank is considered and labelled under the heading of “TOYS” So if you see a toy auction in your neighbourhood, most likely they will have a variety of coin banks for sale.

Some say a Still BANKS ORIGINALLY GOES BACK THOUSANDS OF YEARS

A money bank was originally called a Piggy Bank, and where did the term “Piggy Bank” come from you ask? The term supposedly comes from reddish clay used for making pottery in the Middle Ages, called ‘pygg’. This type of pottery was called piggery, which was also a place where pigs were kept. Supposedly the words got mixed up and by the early eighteenth-century people were making pig-shaped pottery with a hole in the top called a … Pygg-a-BANK.  (PIGGY BANK)

NEAT STORY on the original money banks, but are banks worth collecting?

Nowadays a “Piggy Bank” is typically made of ceramic or porcelain. They were generally painted pretty colours for attraction. Years ago they were handed out as a promotional bank giveaway or other lending institutions to entice the younger generation with the thrift of saving. Giveaways with their logo or advertising labelled on them, “The power of saving money was the slogan.”  And where else would you trust your money at, your local “Ma and Pa International Bank.”

So, the sole purpose of a still bank is, to store your loose change.

Money Bank collecting, whether it’s mechanical, still bank, cast iron, ceramic or some piece of pottery is a big business and one of the top things to collect. 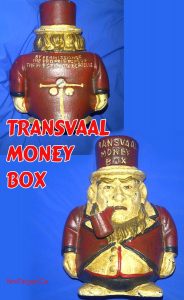 Once you start your collection of banks you will find that it is a well-deserved and rewarding hobby.  This article is for the novice in mind with little knowledge of “Piggy” banks to the well-seasoned connoisseurs.

*** So for the purpose of this article, we will not refer to piggy banks as banks because everybody thinks of as a porcelain looking farm pig with a slot on the top may be a little colour but like one of my readers referred to my blog post as  “Vanilla man” BUT… that’s how I describe an ordinary piggy bank. But make no mistake there are collectors out there that just have a passion for collecting those colourful looking porcelain Porkies.

But to clarify, anything you put your change in for the purpose of “saving for a rainy day” is also called by many other names;

∞ And yes, even Piggy Banks

Please check these search engine pictures (Pinterest) of the different shapes styles and themes, and you’ll get the idea of how neat they look.

No matter what you call them they are all under the umbrella of piggy banks per se,(A place to store your money) but real collectors call them by their proper names, “And they don’t store any money in them”

Something to remember, I could be wrong but there are only two categories in banks, still and mechanical. Mechanical ones to me are the most fun, because of the moving parts that make them work.

TWO KINDS OF MONEY BANKS, I WILL CALL THEM

#1 STILL BANK is a bank that just sits there with a slot in the top for the investor to put his loose change in.

#2 MECHANICAL BANKS have moving parts, pull a lever and it trips something that fires or pushes the coin into a slot in the bank, most popular in the early 20th century up to today. They like most collectibles that have “Working” moving parts, are more desirable,

Now that I have your interest and you still don’t know what I’m talking about, here is an explanation for why you should start this fun hobby.

Collectors of Penny Banks are often attracted because of the nostalgia, looks and history some of these banks have to tell. However, most of these banks are also collectible because of their value and rarity.  Antique banks sell well at auctions, in antique stores, and on the big WWW Internet.

You can still find valuable banks at garage sales and flea markets, for a small amount of change or even yes you can find them in your relative’s attic, that nobody goes into. I have bought banks for as low $2.00 up to $200.00, but some rare banks can go for … thousands of dollars.

“KNOWLEDGE IS POWER” Do your research on the different’s in Coin Banks and Money bank Collecting.

Learning a few methods for appraising a bank, that will let you know if you have found one that will appreciate in value or a good looking (cheap) Reproduction.

A few things I look for on a Penny Bank

Here is another good reason to collect money banks.

Collections of Banks, don’t take up a lot of room, there is normally not a costly habit to start a simple collection, and it’s a fun and rewarding hobby. But remember “KNOWLEDGE IS POWER”

What’s not to like in collecting Piggy Banks, eH

And like most collections of any shape or form, it’s the thrill of the hunt, it’s getting out of that house, stopping watching the boob tube, going to some antique shows, swap meets, garage sales and let’s get started in collecting.

POINT being …. There are literally thousands of different shapes, styles, looks, themes to fit anybody’s fancy.  Many have an interesting history and story to tell, like the   (link)     “Transvaal Mechanical Bank”.

In all my articles on collecting anything, the most important thing to remember is (KNOWLEDGE IS POWER) Researching your bank is your best friend.

Check out these photo gallery links below on “The ordinary to the very hard to find rare coin banks.”

Penny Banks are for more than just storing your loose change.

Originally designed to commemorate the space race to the moon, This is a fun mechanical bank…put a coin in front of the plane, push the red lever and the coin is shot into the slot on the globe…HOW COOL is that.

Former U.S. President John F Kennedy was said to have a rocket ship bank sitting on his desk at the White House.   Maybe just a rumour?

Please check out my exciting post on Collecting Match Box