This is #17 installment of “The Least You Should Know 50 Series” and it’s about simple Sad IRONS, or some people just call them FLAT IRONS.

Your question would be, “are this 70-year-old or better sad irons collectibles?” “I guess they are, and especially when mated with their counterpart, the Trivets. (LINK)

As we know the first generation irons were hand-forged hunks of metal made by underappreciated, hard-working blacksmiths. They smoothed off the bottom and incorporated a crude-looking iron handle on the top and voilà, a sad iron was born. But mated with the proper trivet, some sad irons could be a thing of beauty.

And Bonus! They all come with lots of history of an early and simpler lifestyle.

Many years ago Archaeologists in China unearthed remnants of what they believe was a sort of iron or stone apparatus that they pressed their clothes with. This ironing system dates back to the Middle Ages. “Sadly” the SAD IRON wasn’t introduced to the rest of the known world until around the 12th century.

(They make for an interesting doorstop).

When the iron reached the proper temperature, they were used to iron out your wrinkled clothing after washing. Sitting on a wood-stove over a short period of time, the handles got so hot you had to wrap the cloth around the handle just to hold on to the iron.

∞ ∞ In the late-1800s advertisement for new, detachable-handle irons shows a woman flinging her Hot handled sad iron to the floor as she shouts, “Barbaric relic. I DISCARD THEE” ∞ ∞ 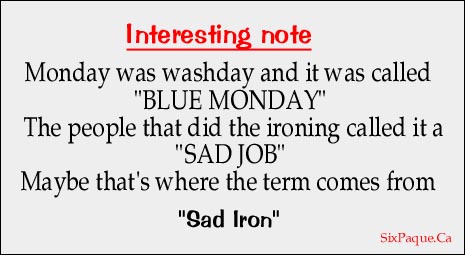 If you are starting to get the itch to collect Sad Irons as your new found hobby, you can purchase these old pieces of sad history at most antique shops, garage sales, etc. You can always find them at flea markets and even the most unsuspecting places, like car swap, meets.

They come in every weight, style, and even small toy ones for the little girls in the family. Through the clothes iron history, they changed or had different styles and options. There were just plain heavy cast iron ones, there are gas-operated ones to keep the iron hotter longer, there were bottom charcoal loaded irons, etc.

An “electric flatiron” was invented by a US inventor called Henry W. Seeley and patented on June 6, 1882. It weighed almost 15 pounds and they took a very long time to heat. But many rural places (hard to believe) still did not have hydro up till the 1950s.

I’m downplaying the role that these sad irons took in our history. They were a much-needed item like the silverware on your table. As I described these sad irons to be heavy pieces of cast iron, some were quite elaborate looking and far from being primitive. Some almost have a mystique look about them.

Today these heavy pieces of cast iron are a good add on to your collection of worthy items. These old Sad Irons are still a very collectible item and have quite a following.

Familiarize yourself with what they all look like. Search Google “Antique Sad Iron” for an interesting read and also search Google Images on Sad Irons. Eh!

I hope you found this article useful and it is for entertainment purposes only, but if you think you’re not a collector, you thought wrong. Everyone is a collector of something. You just don’t think you are.

IF YOU FIND any spell or grammar mistakes, PLEASE GO HERE.