Remembrance DayRemembrance Day is (November 11)  it is a day we honored our Fallen, our brothers in arms for all their sacrifices.

TV documentaries, war movies are as close as many of us will see about the horrors of war, and in most cases, it all has to do with our side and what our Armed Forces have been through.

But I have to wonder with all these conflicts, there is another side that’s going through the same emotions,  through the same hell as our Canadian soldiers.  You read the daily news about North Korea and all these other hot spots in the world and it is a constant reminder that wars will not go away. Technology rapidly changes but our mentality, well ……   IT JUST DOESN’T.

So here I sit, not physically well today, so I’m watching a couple of old war flicks as a reminder of the fallen. Some not so publicized and interesting movies from across the pond, some you might not have ever seen before. Very doubtful these movies were ever made in Hollywood; they portray ordinary people, thrown into a conflict that they have no control over, these people have the same 24 hrs, 7 days a week, they have families that love them, they are fathers, mothers. They hurt the same way as you and me. So I picked these movies to remind me that there is nothing glamorous about the war on either side and I think these movies portray just that. There is a message to be learned in some of these films.

Remembrance Day November 11, we should reflect on all the fallen.

I had to share these titles with anybody interested in WW2 war stories and “What happened on the other side.”

(Das Boot)    meaning “The Boat” in German WW 2 flick … The old movie about the U boat Submarine crew, it was quite popular around the

(The Front Line)  North and South Korean War and how many died over a “hill”.

“My Way” War film is about 2 Korean soldiers and what they went through during the time the Japanese occupied Korea and onto to fight under different flags before World War 2 ended. 3 Excellent war films if you wanted to see, the other side of the story. Buy on Amazon

Remembrance Day November 11, we should reflect on all the fallen. 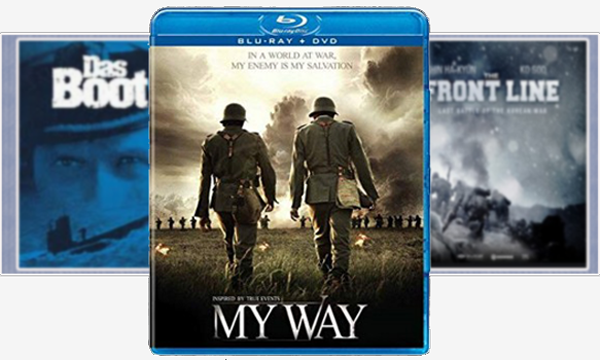