Professionals, novices and people that just want to voice their opinion to the world.

Open to all creative like-minded people that enjoy writing.
The rules are simple if you want to join the challenges to make money. You have to be a member of the Vocal + team.
Once you join and pay their small annual fees payable at one-time or monthly, you’re eligible to join in on these challenges and money-making ideas. CLICK HERE

END_OF_DOCUMENT_TOKEN_TO_BE_REPLACED 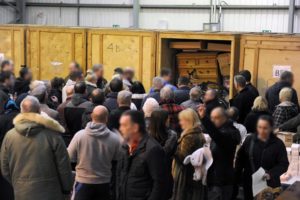 A group of people at a storage auction

“The most gold does win” For you want-to-be storage locker auction Warriors/pickers there are a few things you should know “The man with the most gold DOES win,” but beyond that, the excitement of the unknown.  What’s behind that dresser/box … what’s in that tool case???. That big 52 In. TV BOX, could they have left the TV behind? … That gets my blood flowing faster than hang gliding or jumping out of a plane.

The excitement of the auctioneer blurping out the numbers like he was in overdrive, well some do, and some don’t.  In most cases, that doesn’t happen. It’s very dry and, in some cases, “borrrring” and, with all the reality TV programs, there has been an influx of people wanting to do the storage auction circuit, The gold, the old antiques, hopefully, maybe all the money you’re going to make right. ???

Garbage left at a storage auction

But through all reality, some of these delinquent locker owners have fallen on bad times and might not have left you a lot of gold. Some, if any valuables might have been removed by the owner and left you the rest,  “if you know what I mean.”

There are many reasons why a storage locker is abandoned. Divorces, overcrowding at home downsizing, home to an apartment, death in the family, company closing, but the one that I like the best is the job relocation. (But you’re not supposed to know that) The person did expect to retrieve his goods and, in most cases, took utmost care in wrapping them. Those people always plan on coming back, but in some cases, didn’t find it feasible, so they just abandon the locker.

Those lockers you can spot, they are nicely wrapped with precision, carefully covered furniture, and then you notice, everything boxed in U-HAUL boxes. That would be a good sign. But everybody else sees it too, and if that’s the case, you will have to dig real deep into your pocket.

In the TV programs they cut the lock, you know, it’s all for the show, but in most cases, we do not … we unlock the door with utmost precision with no hype, no drum roll! “But I always wondered, where did they get the key?” Anyway.

Since the TV program American Storage Wars and the Canadian version Storage Wars Canada there have been a lot of newbie’s, new faces, most people being caught up in the hype, and in my opinion, paying far too much for those lockers, so what do I say ….“Buyer beware” it’s only a TV Program

“The power of Television” Eh

Before the TV program about storage auctions, most locker companies had trouble finding buyers and had to dispose and clean out the units themselves at their expense. Now people are coming out of the woodwork to buy the delinquent lockers and paying good money … excellent for the storage companies, and of course, they have every right to try and recoup their losses.

But I have noticed that SOME of the unscrupulous self-storage locker companies have been taking advantage of a good situation. They’re using some of the auctioned lockers to get rid of their unwanted items, so again, buyer beware and buy wisely.

Me, I have a little Gipsy in me & buying and selling is in my blood. I enjoy the unknown; the hunt and, hopefully, I don’t go broke buying too many bad lockers.

Tip …. Set a price in mind, and what you want to pay, and that goes for any auction STORAGE, ONLINE, or OTHERWISE and be smart and don’t go over that price because things happen fast.

Remember, by walking away; you still have your money.

Don’t get caught up in all the TV shows… It’s just Good Entertainment.

If this tells you anything … “One Day, I had to take five trailer loads of whatever to the dump, from one locker.” Who would pay a reasonable storage fee to store garbage? The question is, “Who would buy it?”  Stupid ME

So, you still want to be Storage Locker Auction Warriors?